Irrational fear of water - while washing face and hair and swimming

Client, in her late thirties, had an extreme fear of water. She felt uncomfortable in the bathroom, especially when washing face or hair as she did not like water falling down her face. When younger, she tried learning swimming, but gave up, as she could not put her face in the water. During the regression, she found the origin of her fear of water: 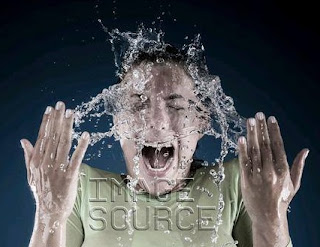 Client regressed to a lifetime in a western country. She saw herself as a very tall, blonde, white woman, married, with 3 young children - a boy, a girl and a baby. She was married to a professional who works in a bank.

In the next scene, she saw herself swimming in the river. The river was cold. It was a very big river.

Her husband and her three kids, age six years old, five years old and a baby were playing in the river, near the river bank. They were very happy.

Then, it started to rain. Her husband helped the children to go back up to the river bank. However, she was still in the water, further away. Then she felt strong current in the water pushing her. She couldn’t swim anymore and started struggling in the water. The current was strong. It pushed her further and further away from her husband and children.

She tried to put her head up until the very end, but finally sank inside the river. She was only in her thirties.

Her husband started crying and her children started shouting, but it was futile. She had to leave her husband and children.

In the next scene, she saw her body inside a box. It was her funeral. (She was viewing the scene from outside of the body). There were many people there. They were wearing black clothes and cloaks. They came, carrying flowers to the funeral wake. People were singing. The man and the kids were crying. It is raining outside. The weather is cold.

After the session, client felt so much lighter and happier emotionally, like a burden has lifted. She also found the connection to her dislike of cold and preferred the warmth of the sunshine.